Dholera SIR had suddenly seemed to be emerging as a new brand in the developing economy of India. A brand that speaks of immense economic opportunities, world class infrastructure, stable employment options and hope; for those in search of affordable homes which had become so scarce off late.

Dholera is being developed on 920 Sq. Kms. of land, an incomprehensible size it is! As per the central government’s vision, the city shall be developed twice the size of financial capital Mumbai and six times that of the famous city Shanghai. The city is envisioned as the global trading and manufacturing hub which is evident from the increasing interests that various conglomerates are expressing to invest in this region. Few of the names include Mahindra Lifespace Developers Limited, Nano Works Developer Gujarat Pvt Ltd. and Isobar Global Holdings, Indian arm of Singapore Based Capitaland Investment Trust. These companies are reportedly going to set up their manufacturing units over sprawling 1,500-3,000 acres of land in the region.

The shaping up of Dholera gave Smart Homes Infrastructure Pvt Ltd. an incredible scope to venture into the region and create something exemplary to live in. With the vision to build affordable housing units for fellow Indian’s that are qualitative, have sound infrastructure and capable of improving one’s lifestyle , we marched ahead to create inspiring projects in Dholera SIR.

A subsidiary of Singapore based company Smart Infrastructure PTE Ltd., Smart Homes takes pride in its accomplished management team who are alumni of prestigious institutes such as Manchester Business School, United Kingdom, IMT Ghaziabad and IIT’s.The organization is a pool of skilled and experienced professionals from apt professionally certified backgrounds who are adept at gauging market demand and administering the projects accordingly.

A leading realty brand in the Dholera SIR region, the organization has successfully launched the first phase of two massive projects: Dholera Smart City and Smart Dholera. The projects are a perfect mix of smart value apartments, deluxe villas and lavish bungalows. They also offer raw non-agricultural land to investors who seek to gain from the appreciation of property prices in the city.

The projects are loaded with world class amenities like gymnasium, club house, landscaped garden, excellent security and play area for children. The organization targets to impart a healthy lifestyle to its residents through its admirable facilities and strategic locations.The attractive opportunities that Dholera SIR offers have knocked the doors of many other real estate firms..

Smart Homes see immense opportunities to grow manifold as the region develops and marches ahead and is framed to be the most admired name in the Dholera real estate. 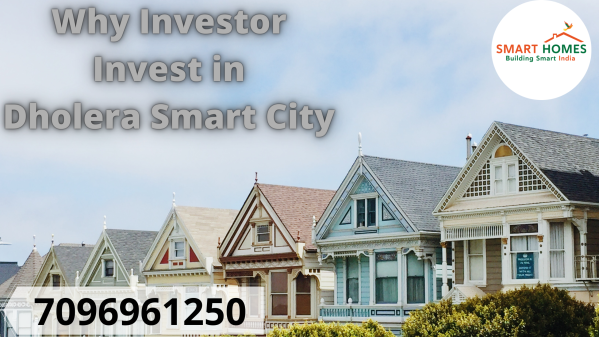 Gujarat has been the soft spot for Prime Minister Mr. Narendra Modi ever since he was the Chief Minister of the state. He has since then fast tracked Gujarat’s development and envisaged it as the economic hub for India.

With the declaration of 100 smart city projects, Ahmedabad, Surat, Rajkot, Vadodara city amongst few others in Gujarat that has made it to the final list. Similarly Dholera Special Investment Region is also a smart city that certainly cannot be ignored and can be viewed as one of the best investment options in India. It is up to the investors to decide which amongst the two shall reap better returns on investment.

Dholera SIR is the first smart city to be developed in India. It has the advantage of being much ahead of any other smart cities of India since the development work on trunk infrastructure has already begin and an amount of Rs. 3,000 crores has been sanctioned by the central government for the same. Planning for the same has also been completed and it is execution time now. however is way behind with planning yet to be done, submitted and approved by the government which seems to be quite a tedious and time taking process. Development shall start post all these hurdles are crossed.

Dholera Smart City is a new city in the making with availability of cheap land making it quite lucrative for investors. Many real estate and infrastructure companies have already signed MoU’s with the state government and promised hundreds of crores of investment in the city. An individual can also purchase residential plots and build Villas and Bungalows in Dholera SIR at a cheaper price as compared to buying a single flat in Ahmedabad, Surat, Vadodara, Rajkot. Thus the appreciation expected on returns in much higher for investors in Dholera compared to the other smart cities.

The planning and infrastructure of Dholera shall be uncompromised and shall be executed through usage of high end techniques. The architecture and designing shall also be done by international architects who are free to plan the city as they like as Dholera has negligible infrastructure development currently. However other developed city is an old city which consists of roads, underground utilities, and buildings and much more on infrastructural front. Revamping the same in accordance with latest techniques shall be a difficult task and transforming it altogether to create a new age city like Dholera shall be almost impossible.

The 10 lane highway of Dholera, connectivity through the new metro route, sanctioning of an international airport in Dholera, connectivity through sea and railways makes the city both nationally and globally accessible to investors and industrialists. It being on the pathway of DMIC corridor is also attracting many companies and investors from across the world. This is certainly and edge that Dholera shall continue to enjoy over other cities..

While Ahmedabad, Surat, Vadodara, Rajkot shall transform to become a much better and smarter city for its residents, Dholera shall progress at a much faster rate and shall be investors delight.